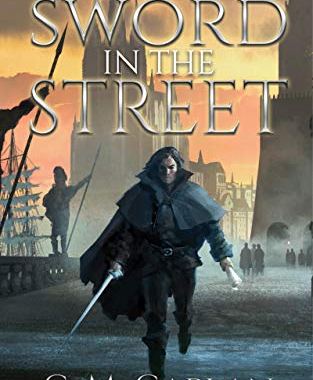 Tomekeeper’s Marginalia:
A triumphant fantasy debut, brimming with positive-representation, and the most human of characters.

Check it out on:

I shouldn’t be alive. What more can I do but make good use of this second chance?

John Chronicle, The Sword in the Street – C.M. Caplan

C.M. Caplan’s debut novel, THE SWORD IN THE STREET, isn’t like any other fantasy you’ve read, though in the best way possible. Looking at the cover, reading the blurb, you’d perhaps be expecting a dark, swashbuckling romp, and while you do get that, it’s more of a background to some exceptional representation and sublime character work.

The plot itself is deceptively light focusing more on the emotions and desires of the two main protagonists. That being said, there is still a great deal of punch from external developments and insightful social commentary. We spend the bulk of our time with Edwin and John, an M/M couple living together in a very unbalanced and, to a degree, unhealthy relationship.

John has much more of an external focus, a desire for personal betterment, wealth, and status, but these seem to be pursued to improve HIS lot, rather than THEIRS.

Edwin is an autistic scholar who really just wants what is best for them both, though perhaps this is more weighted towards John’s happiness and John’s safety.

While on paper, their wonts are, in many respects, for the same thing, they go about them in very different ways, and this invariably causes conflict within the relationship. This conflict is very dynamic and believable, stemming from difficulties in communication. It’s easy to place the blame initially on John, as throughout the book, he feels slightly dismissive of Edwin’s needs, but Caplan does a fantastic job of fleshing out both of these men to create sympathetic and engaging people.

Edwin, for me, and I imagine for many others, is the stand out character. He is gloriously complex, intelligent, deeply caring and with a beautiful dichotomy between strength and vulnerability. While I’m not autistic myself, I do experience constant, often crippling anxiety, and Caplan’s portrayal of this was hauntingly accurate. He really captures the vicious gravity of anxiety with its power to imbue the most minor of worry with a constantly-building momentum, one that will ultimately impact internally, pitting and scarring the self.

Representation on the scale of THE SWORD IN THE STREET is sadly lacking across most literary work currently out there. We desperately need worlds where neurodivergent and LGBTQ+ characters are not considered ‘other’ but just ‘are’, where they are celebrated and written as strong, nuanced characters.

While the city in which THE SWORD IN THE STREET is set wasn’t as well-defined as its characters, it didn’t stop me getting a very real flavour of the place. It’s somewhere between grim European and fancy Venetian, where a brief walk can transform the briny rot of a ramshackle dock to sweet cologne and the rustle of velvet. The societal imbalance of the common folk eking out a life in the Dregs, all but slaves to the untouchable rich of Hillside adds simmering conflict and really drives both Edwin and John’s arcs.

The families, the politics, and the magic are all highly enticing, and I hope they are all expanded upon in later books.

Finally, I have to touch upon Caplan’s writing style, which was a joy to read. It has a directness that allows you to completely submit to the narrative, but as with the duels themselves, there are flourishes aplenty to capture the imagination and heighten immersion. The fight scenes are well written and play out with all the action and strategy you’d expect, plus of course, the mandatory smattering of blood.

For a debut novel, THE SWORD IN THE STREET is a triumph, one that has pinned its heart to its sleeve and bared its incandescent soul to the world.

I implore you to read this book.

If you enjoy what we do, support our work by taking us out for coffee!

3 thoughts on “The Sword in the Street by C.M. Caplan Review”

This site uses Akismet to reduce spam. Learn how your comment data is processed.

The headquarters of all galactic book blogging